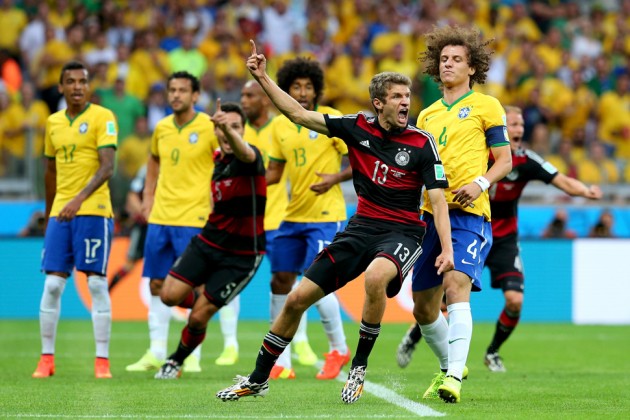 By the end it was hard to watch Germany’s 7-1 demolition of Brazil. Poor Andre Schürrle, the substitute who came in at striker for Germany in the second half, couldn’t quite celebrate his two goals the way Thomas Müller had when he scored the first goal in the 11th minute. A friend watching at a bar in Berlin reported that when Oscar finally scored for Brazil in the 90th minute, all the Germans in the bar offered an empathy cheer.

Brazil certainly under performed on Tuesday and throughout the World Cup. Its wins have all been lucky, barely, or both. But Brazil didn’t just fall apart against Germany (although it certainly did fall apart). Germany beat them with the precise and inspiring soccer it’s played all month in Brazil. This is not an accident, a golden blessing of a generation of talented fussballers. It follows a 14-year plan to find all the kids among 80 million Germans who can really play soccer, train them young, and get them attached to a professional team.

All countries do this, kind of. Belgium does it really well. After tonight’s game you could argue that Germany does it best.

In the 2000 European Championship, Germany didn’t make it past the group stage. Imagine the anger and soul-searching in New York if the Yankees finished last in the American League East. So the Deutscher Fussball Bund, the organization responsible for Germany’s national team, came up with a plan. Traditionally in Europe, club teams had been responsible for their own talent development. Some, like Barcelona in Spain and Ajax in the Netherlands, have become known for their youth academies. But the DFB decided that talent was too precious to leave unfound, and so in 2002 launched a national program to find all of it.

Story: Have Brazilians Lost Their Love of Soccer?

The Guardian wrote a great piece on the German program last year, or you can read the DFB’s own chest-thumping self-assessment from 2011 (PDF). Germany’s standardized national program starts teaching the same skills to 6-year-olds all over the country. It’s run in every town by coaches who have to get a license from the DFB. Then by age 8, as training continues, scouts are watching for the kids good enough for the club programs.

This spring I watched my German godson, Paul, play a soccer game with his youth team. He’s 8 years old. German kids at that age don’t play herd ball. They play their roles, make clean passes, and pick their shots. None of this is left to chance. His youth club, TV Rodenkirchen, is part of the national program. And standing on the sidelines—for a league game between 8-year-olds—were professional scouts.

Every professional club team in the first and second division of Germany’s Bundesliga now has to fund its own soccer high school. Between 2002 and 2010, the amount that professional club teams spent on youth development almost doubled, to about 85 million euros a year. We can already see what this spending has helped create. Last year’s Guardian article listed them:

Müller, Kroos, Schürrle. These are the guys who scored five of Germany’s seven goals on Tuesday. And Germany’s talent machine is only now just starting to produce. A 6-year-old German in 2002 is still only 18 now. (My godson is pretty good, actually.)

We love the World Cup, in part, because it offers us a clear contest between nations with winners and losers. Except with an actual war, this clarity is hard to come by in international relations. Some nations get lucky. Did Argentina deserve its Lionel Messi or Portugal its Cristiano Ronaldo? But a national soccer team is a kind of mobilization, the end of a long plan, sustained over decades, with many moving parts, to find and train talent.

Germany was not blessed with Leo or Ronaldo. But sustaining a complex national plan over years, and committing to it as both a metaphorical and literal investment? Perhaps we should not be surprised that Germany has done this very, very well.