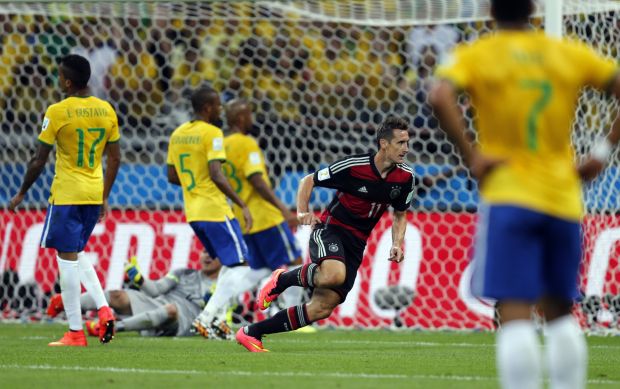 One day later, Germany’s historic 7-1 victory over World Cup favorites Brazil is still hard to fathom. You’ve doubtlessly heard it was Brazil’s first home loss since 1975, the biggest blowout loss by a host nation in World Cup history and the biggest World Cup semifinal rout in history. Somehow, it was even worse than that. Here are seven more unbelievable facts about Brazil’s unbelievable loss.

1. It was almost impossible to bet on the eventual final score.

What you couldn’t do, however, was find many places to bet on Germany defeating Brazil 7-1. The Las Vegas Super Book offered odds on the exact score of the game, but didn’t go any higher than Germany (or Brazil) winning 4-0. (Those odds were 60/1, by the way.) Bovada listed 6-0 at 250/1 but had nothing for 7-1. However, the online betting exchange Betfair says it had someone offer 999/1 odds on Germany winning 7-1.

According to fivethirtyeight.com, the odds of Germany winning by six goals was 0.025%. The odds of Germany scoring seven goals was 0.022%. (The 999/1 odds are the equivalent of a 0.1001% chance.) This after the statistics website gave Brazil a 65% to win the game. As a crow-eating Nate Silver wrote on Tuesday, the final result was “truly shocking.”

FIFA’s score overlay needed to scroll up in order to show the sixth goal, which says as much about the foresight of FIFA than it does Germany’s dominance. Ridiculously, the graphic was only been able to show four different goal scorers at once. They just got lucky Toni Kroos scored two, or else the thing would have been scrolling after Germany’s fifth goal too.

As Josh Levin of Slate points out, don’t buy the “Germany scored four goals in six minutes” thing. It’s impressive, sure, but Germany’s flurry was even better than that. Those four goals came from the 23rd to 29th minute, but when you factor in the goal celebrations and cuts to sad Brazilian fans in the stands, the ball wasn’t in play all that time. In reality, the second, third and fourth goals came in 2 minutes, 58 seconds of game play, according to Levin. Overall, goals Nos. 2-5 came in 4:06 of gameplay.

5. You don’t need to know Portuguese to decipher these front-page headlines from Brazil.

6. Germany-Brazil set a record for most tweeted sporting event.

More than 35 million tweets were sent about the game, shattering the record from this year’s Super Bowl. (People love to tweet about blowouts?) The tweeting peaked at 580,000 per minute when Germany scored its fifth goal. That broke a record that had once been held by the time period during Miley Cyrus’ infamous VMA performance.

7. The game was the most watched program in German television history.

More than 32 million Germans watched the World Cup semifinal on Tuesday, impressive for a 10 p.m. kickoff. That was good for a record 87.8 share (meaning 87.8% of televisions in use were tuned to the game). The viewership also represents 40% of the German population of 80 million. The equivalent for the United States would be 125 million viewers, which is 14 million more than the record number of viewers for Super Bowl XLVIII.